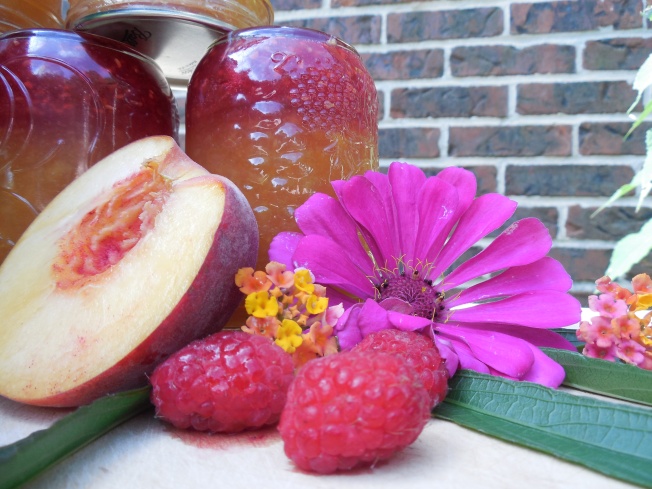 I love the ease and flavor of homemade jam. Peaches are in season now, and I scored an incredible deal for 75 lbs of peaches. I have canned some slices, canned peach jam, frozen peach slices, but my latest peach project has been a layered peach-raspberry jam, or peach melba jam.

The recipe I saw in the Ball Book calls for them to be combined, but I decided to play with the recipe a bit, split the two jams, and see what happened. That’s pretty much what I do with most recipes.

“Oh, this calls for chicken and sesame oil and chili powder…I think I’ll substitute pork, add some sesame seeds and sprinkle in some Cajun seasoning.”

Anybody else use perfectly nice recipes as a springboard for what you want to make?

This layered version is a bit involved, but the visual effect is worth it. Well, I think so anyway. It is a bit time consuming, I have to warn you.

Start by prepping the fruit. Peeling the peaches is the most time-consuming part of the whole process.

Wash the jars and put in the hot canner.

I chose to make the raspberry jam first because I though it would look better that way and I figured it would be denser and more likely to stay in a layer at the bottom.

You could of course make the layers thinner and put some in all 9 jars. Totally up to you.

Now it’s time to make the peach jam. Whisk the remaining pectin into 1/4 cup of the remaining sugar, then heat the peaches and the sugar/pectin mixture to a rolling boil. Add the rest of the sugar and heat to boiling again, stirring constantly. Boil for one minute, then turn off heat and remove pot from heat.

I like to live dangerously, so I just used what was left in the packet of pectin, rather than a whole other packet, which was risky.

It worked for me, and the jam set nicely, but you may want to use a whole packet.

Top with warmed lids and screw on rings gently.

Process half pints for 10 minutes.

I love the look of a layered jam! I’m wondering if I should have put the raspberry on top, but it’s too late now. Maybe if I make another layered jam I’ll put the darker jam on top.

Blueberry and peach would be another pretty combination, don’t you think? I’ve combined them in a jam before, but it might be pretty to separate them.

Have you made a layered jam? I’d love to hear about it in the comments!

Summer is such a busy time in the kitchen. I’ve been working with blueberries, peaches, and figs are next!