No, it didn’t take me to Mars, but do you remember my UFO squash post?

You as my readers had some great suggestions for what to do with my patty pan squash. Of course, I had to try it sauteed first; that was pretty good.

What’s better than that? Chocolate cake.

One of the commenters, tinywhitecottage, suggested making quick bread with it. Of course! Makes sense to me; why not treat it like zucchini and make bread with it?

Then I remembered seeing a recipe on myfavouritepastime. She has a delicious recipe for Chocolate Zucchini Apple Bread. As you can see, I was quite generous with the chocolate chips. 🙂

I thought it was great! It really tasted like chocolate cake. If I hadn’t told people that there was squash in it, they would have never known. To some, it was a plus having a hidden vegetable in the chocolate loaf. Others were a bit squeamish. After their 3rd slice I figured they were over it. 🙂 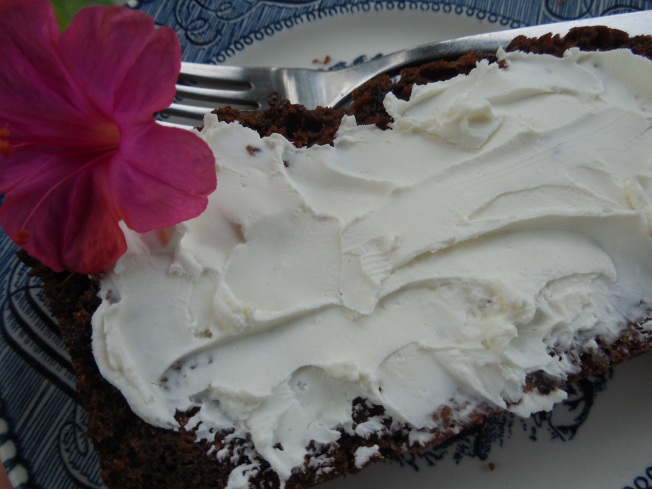 I liked smearing a bit of cream cheese on mine. I recommend that you check out her site-she has so many great recipes and ideas!

Now on to the savory. One of the commenters gave a detailed kebab recipe which included the patty pan squash, red onions, various spices, and slivers of fresh mint. I had a few of the baby squash in the produce drawer, waiting to become kebabs. Well, I was a bit pinched for time tonight so I thought, “Why not just whip up a quick saute using that recipe as inspiration?” 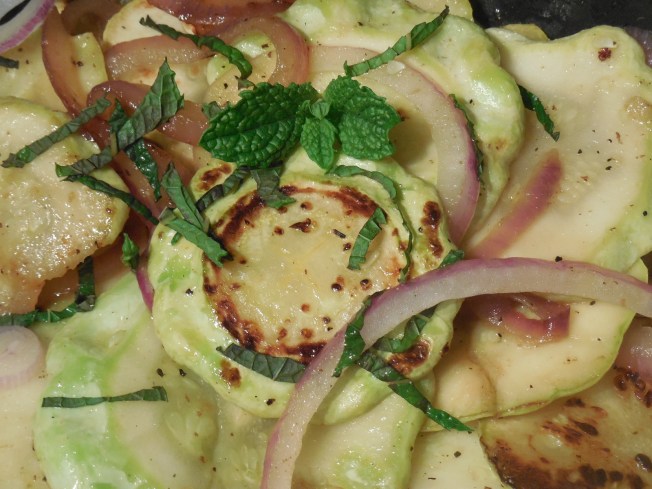 That’s what I did. It really took a rather ordinary, somewhat bland squash and elevated its status. I have to admit to being a bit uncertain about the mint addition, but it was really good! My husband liked it too. 🙂 If you want the recipe, check out the comments on the UFO squash post.

If you grew the squash just because you thought they were cute and figured you would decide what to do with them later (like me), Chocolate Zucchini Apple Bread and Savory Kebabs are a great place to start!

My plants are still hanging on, in spite of the squash vine borers and the intense heat and humidity. I hope to try stuffing them next!

Have you ever grown something just for its looks and hoped it would taste good too?